I just posted the video explanations to all of the math questions in the 2015 December ACT Form 72E Test.

If $t$ and $u$ are the tens and units digit of a positive integer $n$, and the number that results after reversing the digits of $n$ is $18$ more than $n$, then which of the following gives $t$ in terms of $u$ ?

Try this ACT math practice question on finding terms of a geometric sequence:

The first term of a geometric sequence is $b$, and $r$ is the ratio of the second term to the first term. What is the 100th term of the sequence?

The new Real ACT Prep Guide $($Book + Bonus Online Content$)$ 3rd Edition will be released in January 2016. The official guide will contain five tests along with access to bonus content online which will have tips for college application.

My suspicion is that the five tests will remain identical to the tests in the previous guide which was released in 2011. The reason is that the new release is listed as 3rd Edition as opposed to giving it a title of 4th Edition. In addition, the number of pages in the new guide remains at 936 pages, identical to the previous publication. The only change I expect is regarding the optional ACT writing test. The enhancements to the design of the ACT writing test started with the September 12, 2015 ACT test date. I would expect these changes to show in the new guide.

I hope I am wrong and that ACT does release an entirely new set of five practice tests. 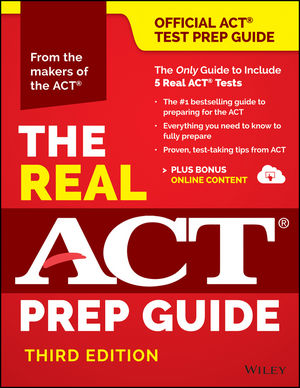 Try this ACT math practice question on factors of a quadratic expression:

The cost of a nylon rope is $p$ dollars per foot. Which of the following expressions gives the cost, in dollars, of $y$ yards and $f$ feet of nylon rope $\textrm{(Note: 1 yard equals 3 feet)}$ ?